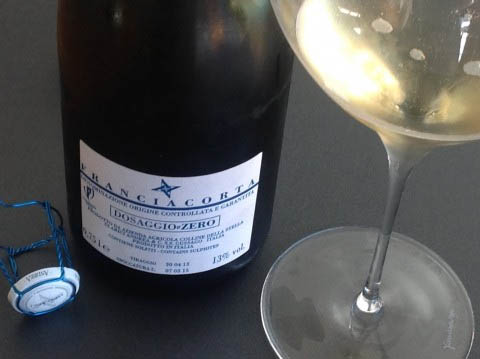 The taste:
In the glass it gains a straw yellow with light green shades.
Fragrances dance on different levels, from a bunch of white fresh flowers picked up by a fiels, from the sharpest citrus fruits such as citron and grapefruit, up to more mineral tastes, coming by stones and marine cliffs.
As any valuable wine, it doesn’t only keep the promises made at the nose, but it also extend them. In fact it is dry, kindly sharp and wonderfully savory, but not salty. The perception of salt in wine analysis should be considered as a fault. To classic endemic sensations of classic methods, which means baking in general, of yeast in a particular way, thin ranges of brackish alternates themselves. Closing your eyes and letting fantasy flow, you can find yourself on a platform in a Mediterrean Sea port. Or others, as you prefer. They all have the same perfumes.
History:
In the end of the Nineties, a twenty-year-old Andrea Arici and his family decide to regains some old terraced vineyards, abandoned for years. We are in Gussago, the eastern territory in Franciacorta. The terraces, which were just a bunch of brambles, with fallen ancient walls for the time passing by, were remade new thanks to Andrea and his father Francesco’s work. The extraordinary farmer spirit, in its noble declination, pushes Andrea to make his first wine bottles lot. With the harvest in 2002 he decides to destinate a small section  of that vineyard to the production of a small amount of wine, made to become Franciacorta. For this new adventure, he collaborates with his friend and enologist Nio Danesi who, even if really young, had already an experience as vineyard manager in one of the most famous italian companies.
After the first fermentation, he meets Giovanni Arcari, a wine rep who went into this world because of his strong passion for anything concerning wine, a world discovered in 1992 and never abandoned. The taste of that first “sparkling base” was really exciting. Flavour and minerality seemed to blend with that fat and elegand backbone, whose intentions weren’t to leave tongue and palate at all. So they decided to fill the first bottles. About 900 of them.
Wines are the true expression of that slice of ground, composed mainly by active limestone which is extraordinarily draining, able to give deep minerality and flavour to wines. Giovanni Arcari’s enhancement and protection of small vineyard activities project keeps getting concrete and includes Andrea as the only vinedresser who produces exclusively “non balanced” (Dosaggio Zero) Franciacorta able to show every feature of that ground, daily employed by him with belief and enthusiasm, respectin lively nature around those vines.
It was the spring in 2010 when Giovanni Arcari proposed us some Franciacorta coming from small unknown companies. We argued a lot, but we chose two of them at last. One ordered and balanced, the other insanity and genius (Arici’s Dosaggio Zero). In those harvests the salt fault was really present. But you only can taste such a strong flavour whether on Tontonara cliff in Laigueglia or in the greatest champagnes. It is much better to have something to manage, more than having to artificially create something that doesn’t exist.
Philosophy:
“Wine, with its vineyard kind, alwas has to be an expression of a certain territory, of a culture, of a piece of ground, of a sky and a man. We believe in respect of the ground and of the man who decided to pick its gifts in a smart way. We believe in our passion. We believe in our job.”
“Terra Uomo Cielo” (Ground Man Sky) project:
The ground, condisered as the vine in which the producer works. The man, in whose philosophy stays the way to interpretate his own grapes with its own peculiarities. The sky, considered as the territory, in other words the main theme of a culture in each vine region.
Fabrizio Buoli