The nose is intense and well defined, with aromas of blackberry and cherry. By swirling the glass, notes of earth and undergrowth emerge, as well as violet, vanilla and cigar tobacco. Licorice and Boer notes close a range of pleasant and fascinating sensations.

On the palate it shines for the full-bodied volume, set in a punctual and satisfying structure, vivid tannins, but already softened by the close links between them, together with minerality and freshness give it elegance and depth over time. Persistent, with widespread aromas of fruit, spices and cinchona.

The Giovanni Corino winery grants an admirable interpretation of Barolo from the Giachini vineyard, capable of expressing all the potential of Nebbiolo in La Morra.

Nebbiolo grapes come exclusively from the Giachini Cru, in the Municipality of La Morra, where the exposure is south and the soil is clayey and calcareous.

The training system is espalier with guyot pruning, with a yield per hectare between 55 and 60 quintals.

After the manual harvest, it carries out the alcoholic fermentation in the macerator rot, at a controlled temperature between 25 and 30 ° C for a period of about a week.

Decanted into stainless steel containers, where it is clarified by decanting and fermentation ends until the sugars are completely exhausted.

Refines in French oak barrels, 35% new and the remaining 65% used for 24 months. Subsequently it is decanted into steel containers, in which it remains, to mix, for another 6 months. 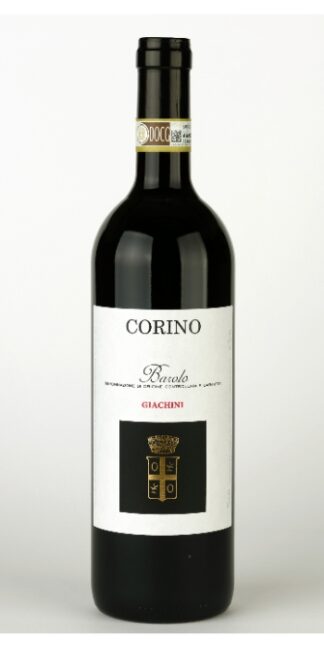