The grapes come from the homonymous vineyard located in the municipality of Canale. The soil is as follows: 69% fine sand, 4% coarse sand, 29% silt, 2% clay. Orientation of the vineyard has a southern exposure to the sun, while the altitude varies from 260 to 290 meters above sea level.

Planted against the back with guyot pruning, it has a density of 55oo vines per hectare.

The yield is 45-50 hectoliters per hectare.

The harvest is carried out manually, and in normal conditions at the beginning of October.

Once in the cellar the grapes carry out alcoholic fermentation, with maceration, for 10-12 days in stainless steel containers.

Ages at least 15 months in oak barrels with a capacity of 30 hectoliters and in used barriques. After bottling
remains in the cellar for a minimum of 10 months.

On the nose it is intense and very fine, fruity with notes of cherry and more obviously red plum. There is no lack of floral aspects with the violet to head. The notes of spontaneous herbs, roots and bittering enrich the whole. Some sections of chocolate together with some spices, such as vanilla and cinnamon, close the picture.

In the mouth it is already balanced. The tannins are gentle. Good minerality and similar acidity. On the other side of the scale, ie that of softness, the pseudo heat of the alcoholic grade and the poly alcohols are integrated to the hardness, for a great final result. From the palate aromas of red fruit and china arrive. Very persistent.

The 2016 vintage is unanimously considered by critics as exceptional. The Roero the Val dei Preti 2016 Matteo Correggia confirms the expectations and expresses himself as a great wine.

Roero la Val dei Preti 2016 Matteo Correggia represents the essence of Nebbiolo planted on the sandy soils of the Roero. Concrete and exciting, it is confirmed each year as one of the best expressions of the territory. 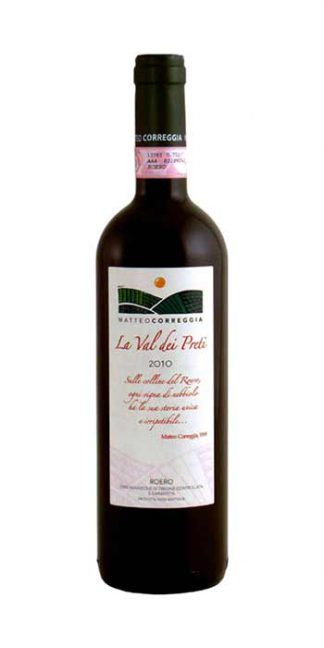