The nose is exuberant with notes of cherry and plum, then floral with dog rose and violet. Very fine the finesse of chocolate and leather that together with some spices, such as vanilla, cinnamon and cloves, close the picture. Not really, because even aromatic herbs are added to the background.

In the mouth it is already balanced, in fact the tannins softened by the barrique, are gentle in pricking, so the whole is as pleasant as it is pleasant to drink. Of remarkable structure and with a very long finish.

Another great interpretation of Nebbiolo by Matteo Correggia. It’s a Roero. It’s not better or worse … it’s different.

The grapes come exclusively from the Roche d’Ampsej vineyard.

Breeding: against espalier with Guyot pruning

The harvest is manual and takes place between the beginning and mid-October.

It carries out the alcoholic fermentation for half of the mass in steel for 10-12 days and the remainder in wooden barrels of 6 hl between 45 and 60 days.
Aging: at least 16 months in 6 hl and small wood barrels, and then 2 years in the bottle.

“On the Roero hills each vineyard has its story told, fabled, handed down from one generation to another and each vineyard has” its “wine, unique and unrepeatable as the combinations of man, earth and sky. I wanted my Roero to talk about the sands of these our pots; this is why the abandoned farmhouse, almost suspended on the rocks, kidnapped my thoughts as a winemaker. I sought out its history and was fascinated by the ancient and discreet nobility of those wine lands, handed down from generation to generation since 1242, passed into the heritage of the Counts Malabalia and the Roero and then into that of anonymous peasants.

When that land and that dream were mine, I decided that a name was needed, and I looked for it among the many dialectal forms of the term “Pecetto”, referring to the “pessere” or “Pinus silvestris” of the sunny sands of the fortresses on the borders of the vineyard . The choice was: “Roche d’Ampsej”, a lexical form handed down from peasant culture ”. 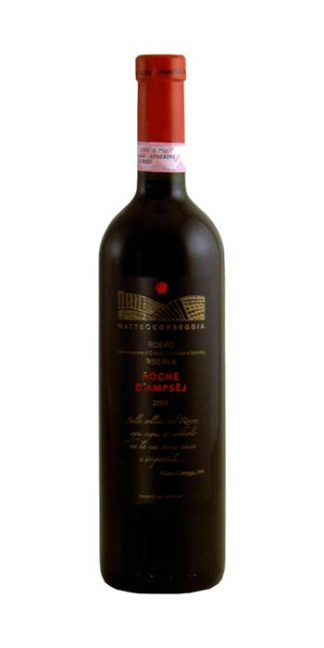