On the nose, among the head aromas we can distinguish the fruit already in jam and the withered red flowers. By swirling the glass one can distinguish plums and cherries, cloves and black pepper. The intense geranium flowers. There are also more herbaceous notes to add charm to the whole.

On the palate it has structure and elegance. The relationship between hardness and softness is good. Among the former, the freshness of acidity stands out, while among the latter, the creaminess of the glycerines. Overall it is a fascinating wine. The aromas that reach the nasal receptors are of berries, and still of other spices, this time sweet. Persistent

Valpolicella is the queen of Venetian red wines, and Profasio is a faithful and devoted Bishop.

From grapes grown following the principles of organic agriculture. The certification was achieved in 2014, therefore only from the following year will it be able to bear the green leaflet label.

The soils are partly clayey and partly marl. the sixth of the plant provides a density of 3500 vines per hectare, and the training systems are for the older vineyards in Pergola and for the newer ones in guyot. Their respective average ages are 60 and 35 years old

At Massimago the harvest takes place manually, after which the bunches are left in the fruit cellar to dry for thirty days. After the period of light drying, we proceed with the pressing and the start of alcoholic fermentation, which lasts 12 – 15 days. After separating the solid parts from the liquids, the wine ages for part of the mass in barrique and part in large wooden barrels for 12 months. When bottled, it remains in the cellars for another 12 months. 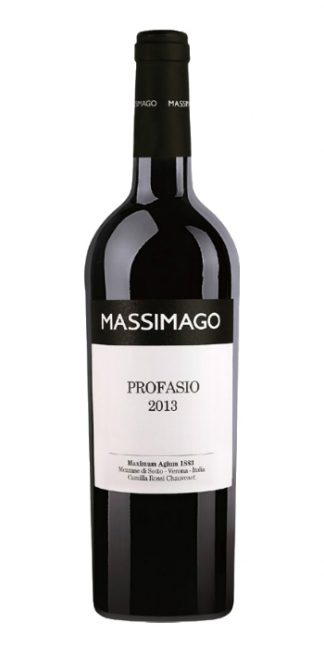