With its 115 hectares, the Fourchaume is the largest of the premier cru of the designation Chablis. Located on the left bank of the Serein river, and next to the 7 vineyards classified as Grand Cru. Exposed to the south / south-east, it is normally the first vineyard to reach maturity.
Aged completely in barriques of 1 year up to those of the fifth passage. The battonage is continuous and regular, so the wine does not absorb the woody scents, but the finer ones of vine and terroir. After about 12 months of aging, the wine is bottled after light filtration.
For several reasons it is the 1er cru that most closely matches the qualities of the Grand Cru. In fact it manages to be extremely flexible, powerful and endowed with great finesse. To the fresh local and exotic fruit are joined the traits of endemic minerality.

2016 was a very complicated year for the entire area of ​​the Chablis. After a winter spent without any frost, in the night between 26 and 27 April the temperature went to -2, with persistent humidity, creating considerable problems in the flowering of the vines. The rain struck persistently throughout May, and the hail has come twice. Despite the treatments with sulfur and copper allowed by organic cultivation, molds advanced in the vineyard. The conditions were so favorable to the proliferation of fungi, forcing Sylvain and Didier to perform two conventional treatments. The consequence was to lose the organic certification, to restart the conversion path of three years. At the end of July and beginning of August the heat has arrived that has finally driven away molds. The careful selection in the vineyard forced the Defaix to lose 70% of the potential harvest.

Accompanies every type of fish, from the finest grilled to grilled, to the humblest ones made to go stew. Excellent with shellfish. 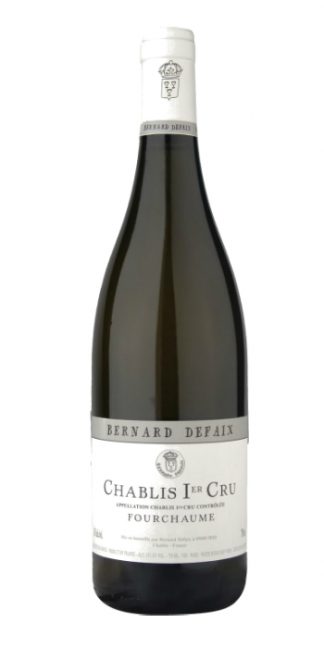